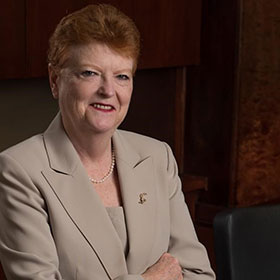 Jane Cline was employed at the law firm of Spilman Thomas and Battle, PLLC as the Director of Public Policy from November 2011 through April 2020. During her tenure at Spilman, Ms. Cline was a leader in the firm’s Regulatory Compliance Group primarily focusing on insurance. She was also a key member of the firm’s Government Relations Practice Group and the Public Policy, Advocacy and Reform Group.

During her tenure at Spilman Ms. Cline consulted with national and state trade associations, insurance companies and other regulated entities on licensing and compliance matters, developing strategy to satisfy regulatory requirements. She monitored public policy and legislative developments regionally and nationally that affect insurance and other industries. She also, worked with companies and national trade associations on legislative matters.

Prior to joining Spilman, Ms Cline served as West VIrginia’s Insurance Commissioner from January 2001 to June of 2011, when she retired from state government with 30 years of service. During her time as Insurance Commissioner, Ms. Cline lead efforts to pass and implement legislation that led to the successful privatization of West Virginias’s workers’ compensation system for the benefit of claimants and employers. Ms. Cline also, worked to develop solutions to alleviate West Virginia’s medical liability crisis and to implement other insurance reforms for the benefit of West Virginia consumers.

Ms. Cline served as Commissioner of West Virginia’s Division of Motor Vehicles the agency responsible for titling and licensing of vehicles and licensing and monitoring of drivers for the purpose of promoting highway safety and revenue collection. During her tenure at DMV she served in leadership positions with the American Association of Motor Vehicle Administrators.